Dear Lady with the Sad Eyes,


As I lay restless tonight, my mind replays my encounter with you today. I know you didn't mean to make us feel exposed and vulnerable but sometimes these things just happen. 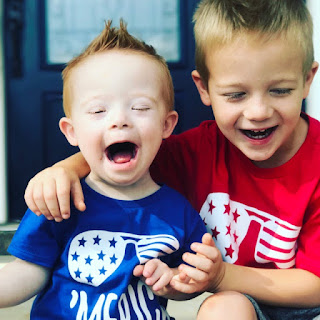 I've seen your eyes before. Though it's been a while since I've noticed them, I've seen them grocery shopping, at playgrounds, and in conversations when I talk about my son. Those eyes of pity. Those eyes that make my heart beat and my face burn. Those eyes that sometimes bring anger and other times, sadness. The ones that keep me up at night like they are tonight.

We saw you and your family at the shoe store. I was pushing my two boys in a stroller. My oldest watching a cartoon on my phone and my youngest sitting quietly at the front. As we strolled aimlessly down the aisle, I saw you see Cash but didn't think much of it. As I came to the end of the aisle and turned to go back the other way, something you said and your sad eyes caught my attention. I watched as you whispered to your daughter, "He's down's, isn't he?" It wasn't the "Down's" part that bothered me though the sarcastic part of me wanted to say "Hello, Captain Obvious." It was the sadness I saw in you. The way your tone and expression made me feel exposed and self-conscious. That you felt sorry for us because my sweet little red head has Down syndrome. As I watched you, I felt those familiar hot tears reach out and begin to choke me. The ones that make me want to hide before any sees the dam break and the emotions come. 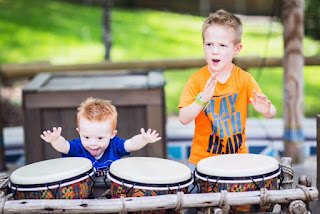 As I continued down the rest of the aisle, my mind was telling me to leave the store. To call it a day and hide away so nothing else can prick those old scars. But, instead, I felt this urging in my spirit to stay. I felt brave. I turned down the same aisle and walked by you again as you stared. Though I didn't say a word, I wanted you to see him again. I wanted you to see his brown eyes and how they shine like glass because of brushfield spots. I wanted you to see the way his almond eyes allow his whole face to smile when he's happy and how that flat area at the top of his nose makes his nose crinkle sometimes. All these things that are, in fact, caused by the "Down's" are actually my favorite things about him. 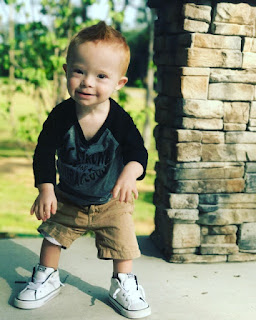 In my heart, I just kept saying to myself, "if she only knew the joy he's brought to our lives. The ways he's opened my heart and eyes. She'd be jealous."

And I hope that, one day, when those little boys start to notice those same sad eyes, they'll walk by with confidence and pride saying, "if you only knew."

We really are the "lucky few." 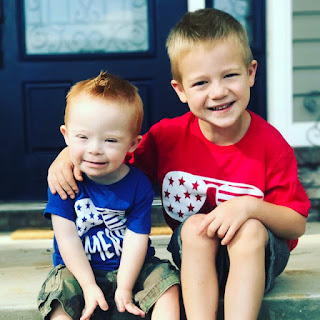