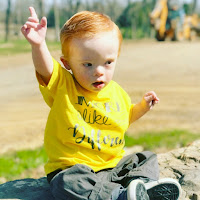 Tomorrow is Cash's 2nd birthday. Like I've told many, I feel like I've lived so many lifetimes in such a short time. As we've approached this day, I've felt an array of emotions. I feel happiness as I look back on the tunnel of the last two years and find that it wasn't nearly as dark and overwhelming as I initially thought it would be. I can still remember the way that I cried that first night after his birth. I was terrified of the journey ahead and felt unprepared and just entirely "not enough." I thought life as we know and dreamed was ending. That's probably one of the few things I was right about. Life as we knew it had ended and we were entering into something so much more profound and deeply moving than we could have ever dreamed up ourselves. 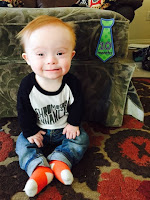 For those who have followed the last two years of our life, I wouldn't truly capture our story if I didn't write about the hard moments and even days, too. Today, facebook memories brought up a video of Parker from 3 years ago. He was 4 months shy of two and repeating everyone's names as I said them to him relatively clearly. It felt so strange because it is so different from where our Cash is now. Even now, as I write this, my view is clouded with tears as the length of the road weighs heavy. Cash says words and signs even more but we are often reminded of how far we still have to go. I fully thought he would be walking by now. Though we progress towards this milestone every day, the reality is that we could still have many months before he walks independently. 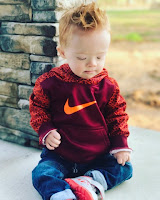 Does Down syndrome make me sad sometimes? Yes. I have spent so many moments and DAYS of the last two years still not feeling like I was enough. I don't spend hours teaching him extra skills after therapy. I only know about as many words as he does in sign language. I don't constantly research new ways to teach him new skills. I usually don't know the latest research and I have trouble remembering when we have appointments. Sometimes I wish I could allow my little boy to be exactly that without feeling guilty. 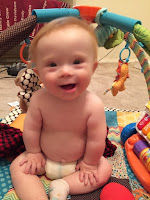 If I could travel back to March 31, 2015 and allow myself a vision of our life now, I know, without a doubt, that April 1st wouldn't have been such a scary day. I would see his smile and the way he giggles in the back of his throat. I would see the way he nudges his head right into the groove of your shoulder to where he feels extra snuggly when you hold him. I would see the way he crawls with lightning speed after his big brother and those eyes that reach into your soul. I would see the way he loves ice cream and macaroni and cheese. And all those days to come, when milestones feel like mountains and the words of others cut extra deep, would dim in comparison to the ways this little boy would change my heart. 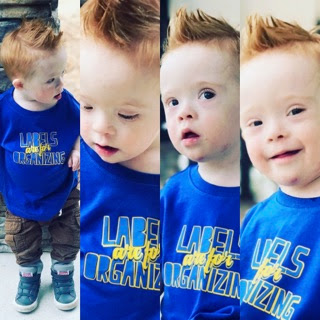 Someday, my little boy will read these words. And even amidst the happy and sad tears we've cried in his life, I hope he will see how much he's changed the deepest parts of me. I hope he sees how proud we are of the ways he's overcome odds and defeated expectations. I hope he sees the moments where he made our hearts swell with pride and how we love others better and deeper because of him. And I hope, more than anything, that he sees how we would choose him, exactly as he is, over and over again.

I was right two years ago when I didn't feel like I was enough. I'm not. But, now I see that I was never meant to be. And on those days, kind of like today, when I feel sad that I'm not enough, I can hear the Lord whisper "but I am."


So we choose joy today, tomorrow, and the next day. Certainly not because it's easy but because we choose to live each day with a changed heart.

Happy Birthday, Money. You are truly "so totally worth it." 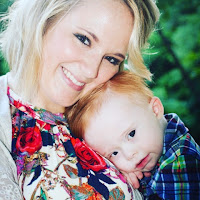 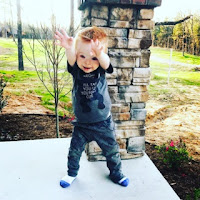 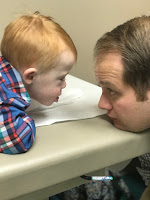