This is probably one of the first posts that I'm really nervous to write. Scared of how others will take what I am about to say. Though the other posts I write are just as honest and raw as this one will be, I wrote them from a place of complete acceptance of where the Lord had led me in our journey. I was confident in the lessons I had learned through our experiences and unafraid of criticism that may come from others as a result.

But this one. This is one that is still heavy. One where I'm still "not there yet" and, depending on the moment it happens, can speak out of an ugly place. One that I can see the old me in over and over again. One that can bring life and power and open new doors to new perspectives. This one's a little different.

I've been thinking of writing about this same thing for quite some time but, as a result of not knowing what to say and how to say it kept me away from this topic. But, of course, as He does, God slapped me in the face with it again today. And now I just can't walk away.

I began Saturday with an early morning meeting for a professional certification that I am pursuing. Warren stayed home with the boys and off I went. The meeting ended earlier than I had expected, around 10:30 or so, and I took the opportunity to visit my favorite little ladies at the nail place I go to. One of my guilty pleasures. I rarely get to go since I almost always am on my way somewhere or have babies with me so I was excited for the opportunity to have a little bit of "Me time." As I walked in, I noticed there were several others ahead of me so I sat down in the chairs to the side and waited. One of the ladies there is one I work an ACT tutoring program with so we immediately began to talk. I mentioned to her that I wouldn't be able to attend an upcoming ACT workshop due to the fact that I had to take Cash to Children's the same day for a check-up. She knows a lot about Cash's story so I just stated in passing "Cash just has an appointment to get his blood checked. You know, since he's at a higher risk for leukemia." Another lady sitting to the side, one that I had never met, heard my comment and immediately expressed concern. Surprised by the word leukemia, she said "Has your son had leukemia before?" Since it's often complicated to explain Cash's story in a public scene, I first said "Well, he has Down syndrome but also had a rare condition when he was born called Transient Leukemia, that puts him at an even higher risk for childhood leukemia." When I first mentioned that Cash did, in fact, have Down Syndrome, she immediately began the "ohhhh, I'm sor...." that I often get when telling people about his diagnosis. I cut her off before she could completely finish by expressing that it was totally okay that he had Down syndrome. She immediately took interest to his diagnosis and began on the topic of children with special needs.

Now, let me preface with this. As we talked, I immediately noticed that she came from a genuinely caring place. So, though many of the words she spoke would have normally hurt my heart, I reminded myself of where I could see her heart was coming from. She noted on the "happy" stereotype that we usually get. How people with DS are just "so happy all the time." You know, they live in a blissful state of fairies and rainbows and never feel actual pain or disappointment. (Those are my words, not hers.) I saw this as an opportunity to explain that, although Cash is overall very loving and happy, he also has a feisty side. A few other ladies and I laughed that his feisty spirit probably stemmed from his fiery red hair.

The lady continued to discuss the topic of special needs. She commented on how she was so happy that now "people like my son" can have jobs. You know-jobs as cart pushers, grocery baggers, or some menial task to give them purpose and identity and the opportunity to contribute to society. These words stung my heart. Though these are perfectly fine options for so many individuals, much of my goal on allowing the world to see our life with Cash is for them to see his potential. For the army that lies in our community to not see Down syndrome first but to see Cash as Cash and dream BIG alongside us. Dreams for a life, jobs, education, marriage, etc. that is anything he chooses to make of it.

Again, knowing she truly meant well, I just commented that we believe that Cash will be able to go to college and accomplish much more, especially with the incredible opportunities available in our world now. She agreed and continued on the topic.

The next thing she said is the exact topic I've bring trying to avoid. She said "you know, I don't even really consider disabilities like Down syndrome and Autism to be in the "retarded" category as much anymore." She had dropped the r-bomb several times in our conversation moments before but this is the first time I felt like I really had the opportunity to address it.

This is the moment I've dreaded since Cash has been born. The moment when someone at school calls him the r-word and I have to explain its meaning to a child that understands he's different for the first time. The first time we would pass an adult while he happily plays in his stroller and hear them describe him using this word. The moment when someone associates his genetic condition with a word that speaks death, limitations, and negativity.

I knew it was coming but I don't think my heart could ever have been ready. The milliseconds that passed between her words and my response felt like minutes in my mind. I was searching on how to explain how that word made me feel to a stranger. How to not come off as if I was angry or hurt but instead approach it with love so that maybe this lady could walk away with a new perspective.

I was searching for something so profound that it would blow the roof off that nail place and allow everyone sitting there to walk away with a new understanding. But, you see, I didn't have it. I couldn't find those earth-shattering words that are so captivating that you walk away patting yourself on the back on how awesome you are. So, to mask my hurting heart, I simply and calmly stated "You know, many try to stay away from using that word anymore because of it's negative connotation." I spoke of a few alternative catch phrases that are often used to describe individuals with special needs and we went on. I didn't speak much after that. I was probably too busy licking my inner wounds and trying to recover from the situation I had been dreading all of Cash's short life. The last thing I said was, "we are so much luckier to have him than he is to have us."

You know, if this would have happened six months or longer ago, when my Aunt had passed away and I was just really dealing with Cash's diagnosis and my often intense anger at the Lord, I would have responded from a very painful place. I was running low on grace for others because I was wallowing in pity for myself. I was selfish. Broken. And so, so angry inside.

Before Cash, I had used that word before too. I've always been very sensitive to how my words made others feel so of course I never used it to describe anyone. I would often use it interchangeably with the word "ridiculous" when I thought someone was being silly or crazy. I had no idea of the power of this word. I've been there. I can understand how, if we just don't know, we can't make a change.

I know some of you reading this are thinking how sensitive we are in today's world. How "we can't take offense to every single word" and blah, blah, blah. I've seen your comments on social media and how the world just needs to "toughen up." Your argument may be true in some circumstances. But, if toughening up means that we just say what we want because we live in "'Merica" and we have the "right" than I certainly don't want to live in your America. What if the trouble with society is not that we aren't "tough enough" but, instead, we lack grace and love for other human beings simply because they differ from us. We spew division, hate, and close-mindedness with our words without thinking of the person first.

Proverbs 12:18 says that "the tongue of the wise brings healing." Healing, y'all. What we speak and how we speak it can bring HEALING to a broken soul. Who would seriously not choose the opportunity to help heal another? Our words have the power to bring hope to those who have no hope. Allow those who feel alone and weary to feel loved and renewed. That's our power and the power God has allowed us. Those of us who get the incredible privilege to be Mommies and Daddies have an even bigger opportunity to teach our children about the power of their words. Because if it doesn't begin with us now, our children will live in a loveless, Godless word full of people who feel it's their God-forsaken right to say what they want when they want.

As we come to the end of October and Down Syndrome Awareness month, I hope you'll remember the power God has given you. The power to speak healing, hope, and joy. The opportunity to breath life into the hearts of those around you.

All with our words. 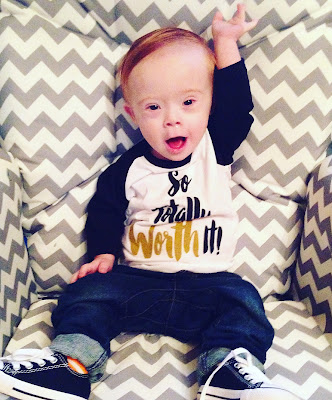 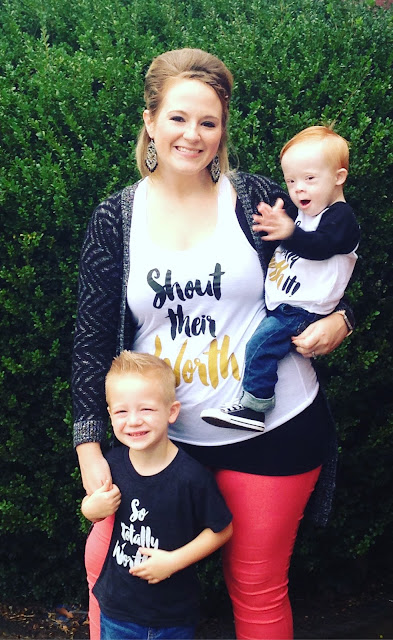